Recently I had the opportunity to spend a week in Singapore. The island nation of Singapore is about the size of the Gold Coast where I live yet has a population of 5 million, or about 5 times the population of the sunny Gold Coast. The rate of building and infrastructure is staggering. It is called “the little red dot” because it literally is a little red dot on the map and because of its incredible resilience. Imagine a country with no natural resources and so small in size becoming the economic power house it is today.

Technology & Design By The Bay

While in Singapore we visited Gardens By The Bay. This is an incredible man made tourist attraction built on reclaimed land with state of the art technology that ensures that the water is harvested and stored from the site as is the electricity needed to run the complex. The Supertree Grove, Cloud Forest and Flower Dome at Gardens By The Bay are man made structures that highlight the beauty of our natural world and their scale is truly spectacular. 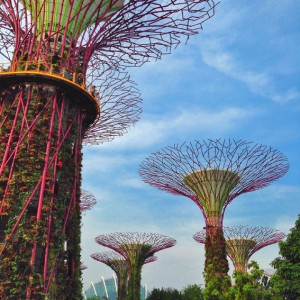 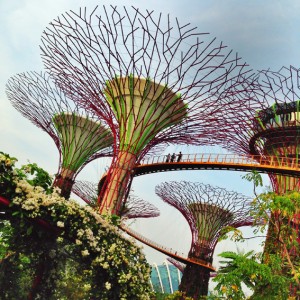 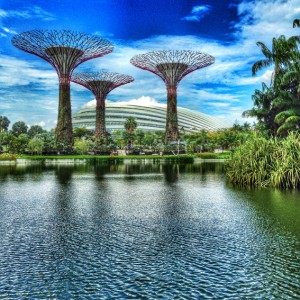 The Supertree Grove with its massive tree structures reminded me of the huge ancient baobab trees that I saw in Madagascar last year. The baobab is renowned for its ability to store water and the leafless branches of the Supertrees were like those of the baobabs. Baobabs lose their leaves at a certain time of the year and look like trees that were wrenched out of the earth, turned upside down so that the roots are showing! There are many legends about how the “upside down” tree came to be, one is that the gods became angry as the beautiful boabab tree became conceited and they turned it upside down to teach it a lesson. 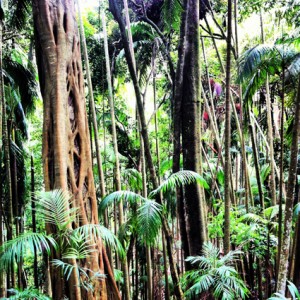 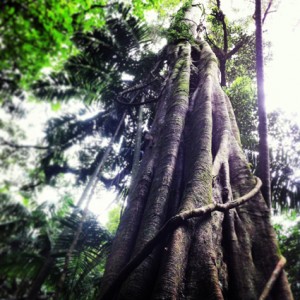 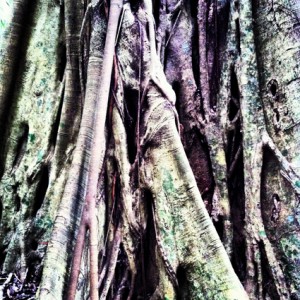 We stayed for the night show of flashing coloured lights and music. I felt like I was in the science fiction movie Avatar, . I wandered through the grove as the show was on to feel what it would be like to be in a forest at night time. On another day we visited the Cloud Forest and Flower Domes, sporting an incredible variety of species of flowering plants and plants that live in the diminishing cloud forests throughout the planet. 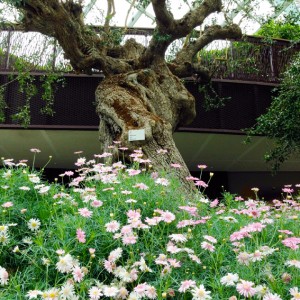 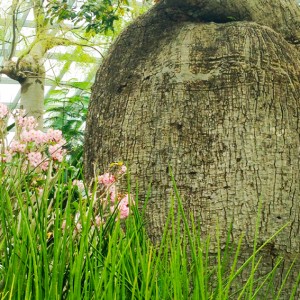 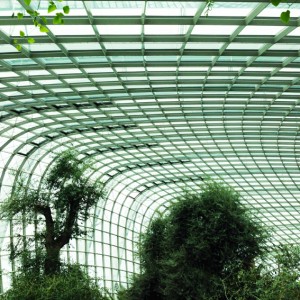 Throughout the entire experience, there was something that kept niggling me. A thought that I couldn’t quite get out of my head. I have never been one to visit ‘touristy’ sites preferring to visit the quirky, local, underground and often off the beaten track places. As we were exploring this man-made pastiche of nature the song by Joni Mitchell, Big Yellow Taxi,  recorded in 1970, kept running through my head. Here are a few verses from the song that I kept hearing:

To enter the two Conservatories was SD$28, a lot more than a dollar and a half in Joni Mitchell’s song! 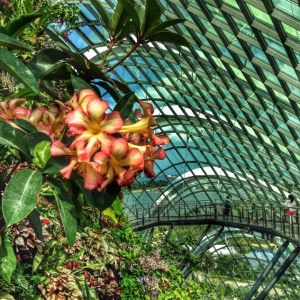 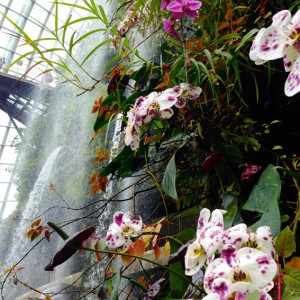 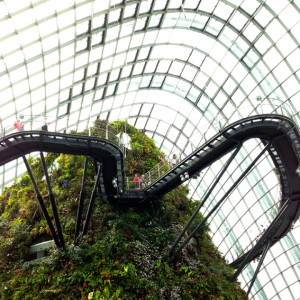 I started thinking about the state of the Earth – massive deforestation, climate change, global warming, the extinction of countless species – and I felt sad. The trip to Madagascar last year and seeing first hand the devastation wrought to this island, with 90% of its original forests gone I thought about with our need to consume more and more we were losing the one thing that sustains us and gives us the ultimate wealth – our planet.

The coming together of technology and design has created new industries such as alternate energies and new efficiencies in how we utilise resources. It is imperative that we now begin to use the wealth created from our consumption to give back to the Earth. I thought about the incredible cost to build the Gardens By The Bay, $1.035 billion, and the cost to maintain the park, $58 million. I am not criticising the project, as I think education is very important to create awareness and appreciation of our natural environment. I just couldn’t shake off Joni Mitchell’s song as I walked through the Conservatories, representing species of plants that are fast disappearing as our hunger to consume goods is insatiable.

The cost to build Gardens By The Bay, combined with the profits from all the DreamWorks Animation’s Madagascar films could have more than reforested the entire island of Madagascar. Steve Fitch, the founder of Eden Reforestation Projects, through education and employment, has contributed to the planting of over 72 million trees to date in Ethiopia and Madagascar, has calculated that the profits from the Madagascar films alone could have reforested the entire island. 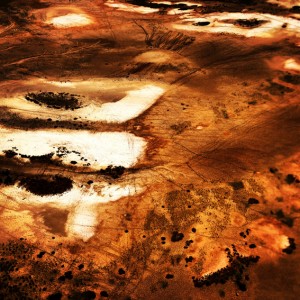 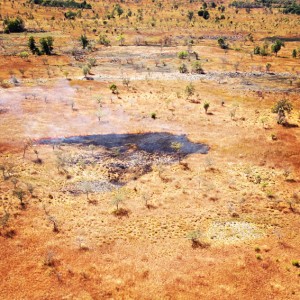 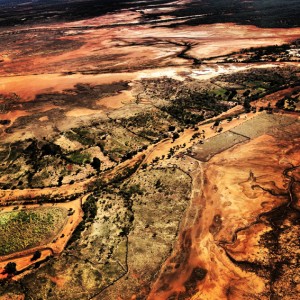 With the world changing at such a fast pace, it is time to stop and smell the roses a little (before they too become extinct and specimens to be seen in a Conservatory). It is time to use the intelligence of new technologies combined with design to help bring a stop to deforestation and to leave a legacy where humans don’t need to leave planet Earth because they have destroyed it to such a degree that it resembles the planet Mars. When we flew last year for the first time in a small twin engine plane and a helicopter over Madagascar all we could see as far as the horizon was devastation. Bare red  earth as a result of human destruction, burning for charcoal, deforestation and slash and burn practices. In fact, astronauts from space have commented that Madagascar looks like it is bleeding to death as a result of deforestation. Valuable top soil is washed into the streams and rivers and is washed out to sea.

Singapore is the economic power house it is today and it has built it not through an abundance of resources but through human ingenuity. I take my hat off to the Singapore government in creating such an incredible trade oriented market economy. Singapore is possibly the world’s greatest example of what can be achieved. Imagine we are able to harness technology and design and social change in a way that Singapore has? How could we transform our world and the environmental challenges it faces?

By utilising our collective wisdom we can make a big difference to the future of our planet. The Supertree Grove, like the baobab tree are a symbol of our resilience, strength and wisdom in facing our circumstances and seeing problems as opportunities to transform them. 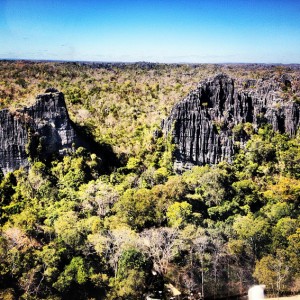 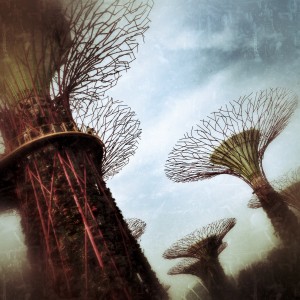 We all make choices every day. We are all part of the problem and all part of the solution. We can continue to ignore what is happening to our world like an ostrich with its head in the sand, or we can begin to change our consumer habits – what we consume, how we consume – what choices we make. The images above show the Supertrees as if the Earth became uninhabitable and the human species disappeared. Imagine that many thousands of years from now the structures were still standing, and the Earth and its species had reclaimed them.

The first image is of the Tsingy Forest in Madagascar. This is an incredible place. It is like a Lost World which is near impossible to traverse through. It consists of a forest of razor sharp limestone pinnacles with forest and wildlife living here. We were dropped into an area of the Tsingy, by helicopter. This area was once coral. Can you imagine what new species live here that are new to science? Imagine some time in the future, humans have disappeared, and amongst the ruins of the Supertree Grove, new species of animals and plants had evolved.

* Featured image on blog page of woman planting with only one tree in the background is care of Steve Fitch, Eden Reforestation Projects.